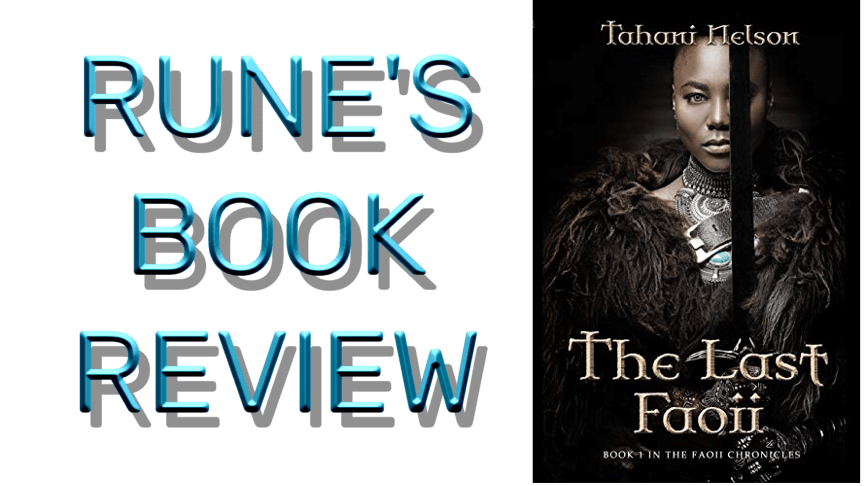 The Last Faoii: Book 1 of the Faoii Chronicles
by Tahani Nelson

For generations they’ve defended the wall…

…until the day the monastery fell.

Will one woman be enough to raise an army?

Kaiya has studied hard, learned to fight, and knows of the old ways. She has learned to be a warrior in service of the great Goddess. Now, with everyone she’s ever known slaughtered, there isn’t anyone else. Honor bound to the Eternal Blade; she must find a way to defeat an ancient foe.

What is her first move?

Is she prepared for what she’ll find outside the cloistered walls?

In a broken empire, a darkness grows. The bleak future sows panic among the people. As Kaiya sets out to avenge her fallen sisters, she finds her training won’t be enough to defeat the army that creeps across the land. She must learn to lead.

And she must develop her powers.

Will there be time?

Before I continue with the rest of this review, I have a confession to make. Being a man, I was reluctant about starting this book. I had feared it might be so exclusively about warrior women I wouldn’t be able to associate with it. However, that fear was quickly alleviated as that’s not at all what this book is only about. It’s as much only about warrior women as Lord of the Rings is only about hobbits. If you are a fan of fantasy, regardless of your genre or age, then this book is for you.

Throughout this book, Tahani Nelson not only takes us on a fast-paced journey into her world using dynamic and imaginative scenes but she does so with descriptions weaving a tapestry of words that build a story that’ll be sure to stay with you and bring the characters to life as if you’d known them all along. Normally, I might say Tahani’s a “witch with words”, but, after reading the book, I realize this might be seen as an insult in the world of Faoii, so I’ll instead only call her a “Preoii with prose”.

There are two things I like most about this book, beyond the fantastic story structure and its believable, memorable characters, and the way they are so wonderfully delivered. Two things that make this book unlike any I’ve read before. The first of these is the way magic is used in the story. It’s not the “in-your-face” magic you typically see in other fantasy stories. Instead, the little magic that does appear is as natural as say, nature, itself. And it’s presented in unique ways that I’ve, personally, never encountered before. The second thing I like most about this story is the subtle, timeless message it leaves the reader with long after the story has ended. It’s not simply good versus evil, or dark versus light, but you’ll have to read it to fully under what I mean by this.

All in all, this book does exactly what we expect from great fiction, and then more. Well-described story and characters that escort you into another world, pull on your imagination and emotions, and then gently release you back into reality while leaving you both satisfied and in wonderment.

Finally, to conclude this review, I feel the need to say…

Subscribe to my Newsletter and never miss a Contest, Giveaway, or Promotion.